A few days with A.M. Hargrove, review of Survival, Book 1 of the Guardians of Vesturon Series 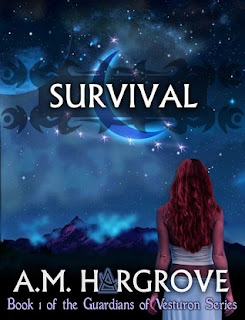 Survival (Book 1 of the Guardians of Vesturon), a YA paranormal romance

"Maybe I was caught between the two worlds. I was having serious trouble distinguishing fantasy from reality."

While on a backpacking trip in the Great Smoky Mountain National Park, nineteen-year-old Maddie Pearce finds her world has been thrown into a vortex and is madly spinning toward the impossible. Abducted by a mad psychopath, Maddie narrowly escapes with her life. But that is only the beginning. Her mysterious rescuer introduces her to a world that Maddie has difficulty accepting as reality. Will this strikingly gorgeous stranger be the key to her future or will she return to her mundane world, scarred from her experience? Follow Maddie as she is forced to make difficult decisions that carry her to mysterious places.


Then, unexpectedly, three brightly glowing melon-sized balls of light came soaring across the dark sky. When they were a few feet away from me, they elongated into long thin slivers. Moments later, the slivers expanded and then took form into three indistinct shapes.

I kept blinking my eyes, not trusting what I was seeing. I was positive I was hallucinating. This must be what happens right before you die.

Then, the indistinct shapes morphed into three men—three very tall, powerfully built men. They were identical in that they were all dressed alike—wearing black hooded cloaks that fell to their ankles. The hoods hid their faces, but I had the strangest feeling they were there to help me.


This book kind of rocks, folks!  I usually don't go for the science fiction thing, as I enjoy paranormal and urban fantasy.  This book was definitely an exception:)

The main character, Maddie has had a rough go of things.  I mean, how could you not feel for the poor chick.  Having to endure the death of not one, but two parents is beyond imaginable.  Her coping mechanism is to build a carefully erected wall around herself, to keep everyone out.  She couldn't go through that kind of loss again.

I admired Maddie for taking a chance and opening up to her roommate Cat.  She turned out to be a great friend, even if only for a brief time in Maddie's life.

Then the unthinkable happens.  Maddie just can't catch a break.  A psychopath on the loose kidnaps her and slowly begins his relentless torture.  It's a miracle she still has her mind by this point.  She's such a strong and tenacious person.

Then she meets him.  Dude, as you could expect, sparks fly.  She is drawn to this mystery guy that seems to demand respect from those around him.  It is kind of sexy.

Once Maddie realizes the truth, she takes everything in stride and embraces her new path in life.  She suffers still from her attack and puts such a positive spin on things.  Then she travels to the unknown and everything she has ever known changes.

I don't want to give away too much, I just want to say this book was made of awesome sauce.  It is the first book in a series and a great start at that.  It's free and you can't go wrong with giving it a chance.  Peeps, you will totally love it!

This is a young adult paranormal romance and I highly recommend this read to older teens and new adults, alike.  I give this intriguing read four glittery stars!!

Check it out for free on Amazon!!!

Check it out for free on Barnes and Noble!!!

If you are an old follower via GFC, please re-follow me. I have moved to WordPress. I have listed following options below.

Since my blog is now a Self-hosted blog you will have to follow me through: email subscription which is at the top of my sidebar. :)